Theodore has a long professional experience mostly in consulting (general business, change management, IT and HR).   Except Greece, he has worked for several years in various countries in Europe and various locations in USA.  During his professional career, he has worked in international companies in IT projects, redesign processes, getting involved with change management and human resources in the USA and Europe. Have been directly involved in several (20) US and European SAP R/3, SAP HR, CRM implementations and e-commerce projects working as a team lead, project lead and project manager/director getting valuable hands-on experience. Theodore has served for two years as Director of Information Technology Europe in a large specialty chemical company Crompton Corp (now Chemtura/Lanxess) based in London.  Responsible for the European SAP roll out in various locations and the support and upgrade of existing SAP locations.  In the last 15 years, Theodore served as a General Manager at a group company of National Bank of Greece, as Chairman and CEO of two major public hospitals, Laiko and KAT. Currently he is the Executive Director of ICAP Employment Solutions, which employs 2.500 staff at its customer’s premises.

He is an elected President of the Hellenic Federation of Private Employment Companies since February 2013 granting presence in the World Employment Confederation. 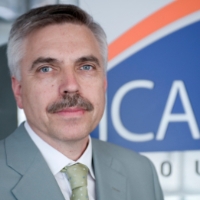